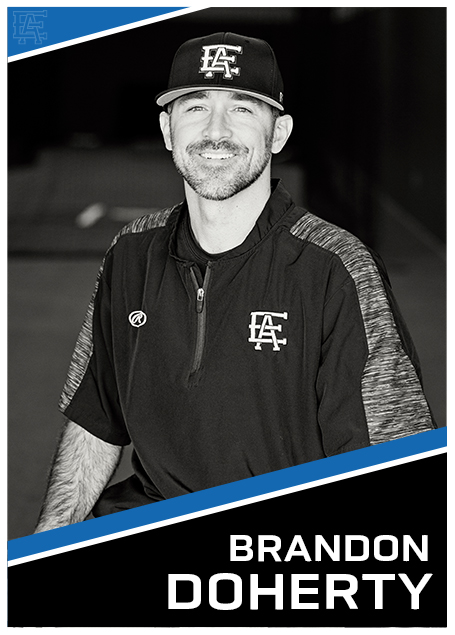 Brandon Doherty grew through youth, high school, and college ball, a majority of playing time was spent in the Middle Infield and Centerfield. He was a switch hitter from 8 years old to his Junior year of college. Brandon attended Rockhurst High School in Kansas City, MO and was the team captain on Rockhurst’s first ever State Finals Appearance 2004 that finished in 2nd place. That year, the school was the #1 ranked team in the state, #3 in the Midwest and #22 Nationally ranked by USA Today. Brandon is the school record holder for hit by pitches in a single season (12).

Brandon attended Junior College at Hutchinson C.C. in Hutchinson, KS where he was honored by being the team captain on back-to-back Jayhawk West Conference Championships in 2005 & 2006.  After Junior College, Brandon transferred and graduated from Michigan State University where he started in the middle infield for 2 years.

Since finishing playing ball he has served as a private baseball advisor and trainer for  individuals and teams of all ages Youth through High School. He has also served as the head coach for the Kansas City Canes 13U Major (2009) – National Champion Omaha World Series, the recruiting coordinator for Coffeyville CC (2010), Assistant Varsity Coach at Rockhurst HS (2014) and the Head  Coach for the Prime 18U Showcase Team (2019).

Blair grew up in Topeka, Kansas where he was drafted in the 2nd Round (42nd overall pick) to the Pittsburgh Pirates. He played 8 years professionally and has acquired over 20 years of coaching and training experience.

Dustin serves as an EA Staff member and Head Coach in our High School program.  As a former professional baseball player Dustin brings vast knowledge to our EA players.

Wes has demonstrated an ability to connect with the kids in multiple aspects of the game. He is inspired to give back to the game of baseball and help boys better themselves.